POROSHENKO CAUSING A DISASTER IN LUGANSK AND DONETSK 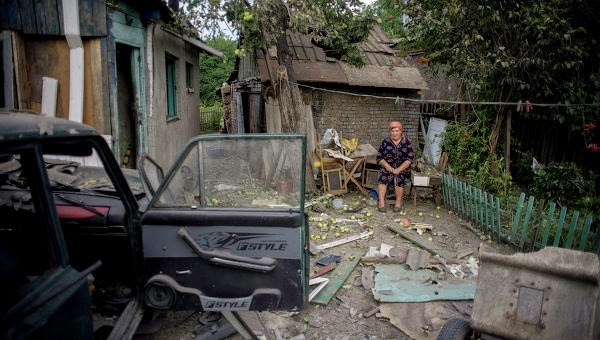 NEDERLANDSE VERSIE HIER. Allright, Feyenoord is playing a European match against Lugansk on 21 August in Rotterdam, Torrez where the wagon with Dutch MH17 luggage was located on the brink of being levelled with the ground, on Dutch radio the use of language is being discussed, and in the meantime a DISASTER is taking place in Lugansk and Donetsk. Petro Poroshenko, President of EU/USA/NATO/IMF supported Ukraine sends his troops overhtere and does not limmit them targetting any civilian opbject one can think of. It has nothing in any sense to do with a so called "Anti Terrorist Operation" ("ATO"), but it has all to do with a criminal ethnic cleansing operation. And we reiterate, dear people of the EU, USA, Canada and Australia, it is done among others in Your name, with Your taxpayers money. And the Western State media -at least in Holland- hardly inform you about it. That's why we do it and and we name it an EMERGENCY CALL.

We are not completely on our own. Secretary General of the UN, Ban Ki-moon is also very worried about the situation in East Ukraine.“Innocent civilians trapped in the fighting continue to lose their lives,” he said Friday. Ban added that “restoring vital infrastructure, not least for water and sanitation, is essential for a return to normal life” and that “the number of those who are fleeing the area continues to grow.” Read more HERE. And also more backgrounds HERE.

But let's take away the diplomatic razzmatazz around Ban Ki-moon's words and put it the way it is:

PETRO POROSHENKO, TOGETHER WITH HIS UKRAINIAN ARMY IS BOMBARDING WITHOUT REGRET AND LEVELLING TO THE GROUND ENTIRE CITIES AND VILLAGES NOT SPARING: CHILDREN, WOMEN, CIVILIANS, RUSSIAN ORTHODOX CHURCHES, SCHOOLS, HOSPITALS, POWER PLANTS, WATER SUPPLY, URBAN AREAS, ESCAPE BUSSES, RELIGIOUS PEOPLE (5 Priests have been killed as well), FLOWERS, EVERYTHING IS FINNISHED OFF. AND HOLLAND LOOKS AWAY. IMF TRANSFERRING ANOTHER SUM OF MONEY TO THE REGIME? IT'S NOT IN ANY WAY A SUBJECT FOR DISCUSSION IN THE ROYAL KINGDOM OF THE NETHERLAND. RASMUSSEN STRENGTHENING THE TIES WITH KIEV? NO COMMENTS. DUTCH MEDIA SIMPLY CONTINUE TALKING ABOUT POSSIBLE RUSSIAN TROOPS NEAR THE BORDER WHO AT THE END PROVED NOT TO BE THERE. INDIVIDUAL NATO COUNTRIES CAN CONTINUE TO SUPPLY THEIR ARMS. HOLLAND CAN EXPORT THEIR FAMOUS NIGHT BINOCULARS TO THE UKRAINIAN ARMY, FASCILITATING THEM TO EVEN MORE PRECISELY TARGET CIVILIANS AND THEIR OBJECTS. POROSHENKO CAN SIMPLY SAY HE DOES NOT AIM AT AND DOES NOT TOUCH CIVILIAN OBJECTS AND DUTCH MEDIA SIMPLY SPREAD THE "NEWS" UNCOMMENTED AND CONTINUES WITH ITS FUTILITIES. IT IS HAPPENING IN THE MIDDLE OF EUROPE, MADE POSSIBLE BY THE GOVERNMENT AND THEREFORE THE PEOPLE OF HOLLAND. 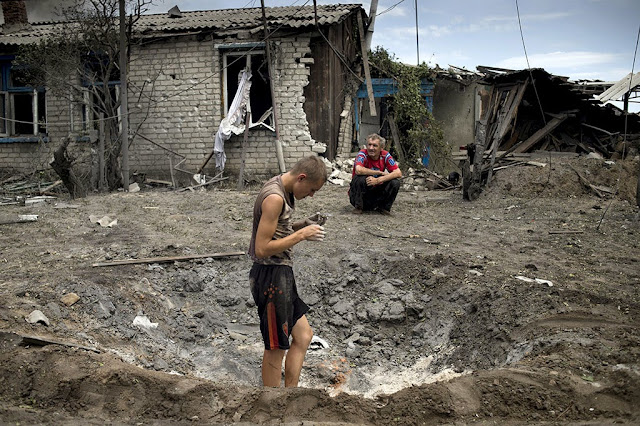 In the meantime Canada sends a Hercules transport airplane filled with usefull military equipment, worth usd 4,5 million. Moving pictures HERE. And also Canada sends two ice-breaking ships into the Arctic and seems to aim at increasing its territorium at the cost of the Arctic. Info, in Russian, HERE. As the New York Times indicated yesterday with their headline: "If you want to beat Putin, support Ukraine". That's what is going on.

In Lugansk the Ukrainian army has just destroyed the last working power plant leaving the city completely without electricity, without normal water, without telephone connections. Shops are closed, no bread, drug-stores closed. Half the population has left, meaning the other half, stil a quarter of a million, are trying to survive. In the last 24 hours, as a result of the government bombing six peacefull civilians have fallen victim. A girlo of six fell victim as a result of wounds. SOURCE. Video, in Russian HIER. We just repeat:

A SIX YEAR GIRL HAS DIED IN THE MIDDLE OF EUROPE AS A RESULT OF A BOMBARDMENT BY THE EU/USA/NATO/IMF SUPPORTED REGIME OF PETRO POROSHENKO.

Isn't there any positive news? If you are able to go through the rubble, yes, there are examples of the remarkable attitude of the Donbass people, read today's report of a local Donetsk journalist (Day-TV Donetsk):

"The Ukrainians just fired on Donetsk. Smoke is visible above the area of Kubishevsko. also around Makeevka smoke is seen. We went over the road on the Mariopel track. The block-post at the entrance of Donetsk was shelled by Grad. Holes, burning gras, fire. One civilian wounded. Then we entered Donetsk. First thing our eys caught: a wedding. The croud was not big. But a limo, a bride and a gown, and the groom in a suit. Everything as it should be." Regrettably no photos to support the story.

Heavy calibre attack on Gorlovka, 9 Augustus, less than a minute.

The results of the bombardments of Gorlovka, 7 Augustus 2014

In Italy people rise in support of Donbass people against fascism. In case the video cannot be seen (this can happen when you do not allow to show all), then, klick here (is worthwile to see the Italians in action, Italians understanding what is happening in and compassionate with Donbass): http://www.liveleak.com/view?i=daa_1407514938

Video 18+ above shows what the Italians rally against: Killings and woundings in Sugodolsk in the Lugansk People's Republic, 6 August 2014. The village is located close to Krasnodon and fell victim to the Ukrainian airforce. Killed: a total of 5 people, among them parents with a child. Wounded: women and elderly people. 23 Of the wounded have been delivered to the hospital. The youngest is a girl of 6. The oldest a 94 year old. All are wounded with pieces of casette / fragmentation bombs (forbidden to use in populated areas by international convention but nothing stops NATO supported Poroshenko). Wounded involve lightly and heavily wounded. Watch the beginning and watch at 10:05 "I do not understand why the see us as enemy, but in 15 seconds time I lost all my neighbours. Does Poroshenko have a conscious, doing this? I am from Sugodolsk myself, I am a commander in the mines, I have been awarded honorable medals, but I do not get why he is trying to kill me, a worker". Anybody able to get this video translated and subtitled in English?

These are attacks by the Ukrainian army, today 9 August, Gorlovka. Look at 0:16 what a Zenit rocket attack, supported by the Royal Kingdom of the Netherlands, looks like, and the results for the ordinary people. In case the video does not show up, please go here: https://www.youtube.com/watch?v=mVTIJ-8epcU#t=20 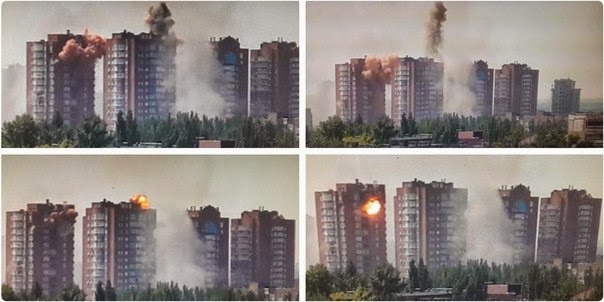 Once again pictures from Perwomaisk, 6 August with our own translations in English and Dutch. Click once video is running on the right, below to chose your language.

Have a look at this very well written article by Rock solid politics: