Two Russian heroic journalist killed yesterday, Tueday 17 June. Igor Kornelyuk and Anton Voloshin. Thanks to brave men like Igor and Anton we know so much more about what is going on in Ukraine. And of course you need to be a little bit crazy to go out there. When all journalists would stay in their comfort rooms in Moscow for instance, we would not know what really is going on in Lugansk, in Kramatorsk, Slavyansk, Shastye, Mariopel...

One of those "journalists" staying high and dry in his comfort-room in Moscow, is Mr DAVID JAN GODFROID, "correspondent" for Dutch State television, NOS.

First we look at the main NOS 8 o'clock news. This is Hollands prime time news broadcast, for which Godfroid is collaborating.

Now we take a look at the TEXT service by the same NOS organisation and their news, their ONLY news about Ukraine

We will give you a brief translation:

Ukrainian president Porosjenko wants a ceasefire in the east of the country. When there is no fighting anymore, Kiev can talk with the rebels about peace, Porshenko says.

The army is fighting in the East against pro-Russian seperatists, who took power in some cities. According to Kiev and the west, Moscow helps the rebels with men and equipment.

Therefore Poroshenko requires first that the border with Russia is well protected, before the ceasefire can get started. Now transports from Russia can come in freely because border officers have left there positions.

Now we give you the latest tweets of Mr DAVID JAN GODFROID (commenting on the 2 killed journalists):

TWEET 1, DAVID JAN GODFROID commenting on the video, bravely shot by the only surviving journalist, Victor Denisov, at the moment Igor and Anton are shelled and killed:

TRANSLATION: And again such a video, not clearifying anything at all. https://www.youtube.com/watch?v=mIguR6GtymU …

Today, Wednesday 18 June 2014 Ukraine made it to the 8 o'clock news. The headline again was "Ukraine offers ceasefire. Of course not commenting about casualties, killed journalists or kiled civilians, or cleansing ("filtration") going on. 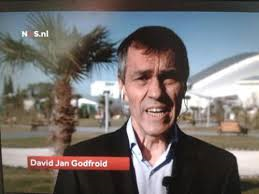 What can we make up from the above? First of all, when something happens to what are his Russian colleagues, GODFROID inmediately emphasises on the fact that they are Russian "State-television" journalists. And the film that the only surviving colleague of the two managed to shoot under those circumstances, GODFROID simply and even irritatedly twitters around to debunk it as "again such a video, not clearifying anything at all". NOS and GODFROID are in COMPLETE DENIAL of the atrocities taking place in East Ukraine. Not any picture, any word, any film on victims, casualties, destroyed houses or continuous shelling by the government forces. Instead of this, NOS and GODFROID are selling the EMPTY promises of USA backed Poroshenko as the only news, picturing him as the peace bird. It is like being in 1942 and only commenting on Hitler that Hitler wants peace and ceasefire. Full stop. GODFROID and his NOS organisation are almost 1 to 1 spokesperson of the USA-Poroshenko regime. If this regime can be considered a CRUEL regime, how can Godfroid be considered?

"Yes, but what is Cruel?", you may say. Well, I will spare you the pictures of more destroyed houses, bodyparts shattered around or killed children. Let me give you this message I am getting from Donbass, from a private acquaintance, local people from Donbass, who still dare to speak out:

There are occasions of targeted shooting of peacefull inhabitants.

Did you get it? THEY ARE SHOOTING AND KILLING UNARMED PEACEFULL PEOPLE! How do we call this? And State-journalist GODFROID and his state-television NOS-Organisation? They are denying these news-facts completely and are just covering, exactly like Ukranian State-television, the empty "ceasefire-plans" of Poroshenko and happily playing army musicians.
Gepost door Blik op 22:35