Because of the importance of this item, we continue in English. Hold your breath, keep reading, and then, spread this information.

In the below video, the Ukrainian Ministery of Defense states about "FILTRATION" as follows:

"There will be a complete filtration of people by special filtration measures. Women will not be excluded from the "filtration" of everyone connected with seperatism and terroristic activities. We have a rich source of information and people will be moved to different regions."

Needing any comment to this? Ok, we summarise: The Ukrainian regime bombs, kills, the Donbass people. With tanks, artillery, "GRAD" rocket installations, from aviation with "cassette" rockets, etcetera. In a town like Slavyansk with an original number of inhabbitants of 140.000 are only 60.000 left. The exodus of Donbass people will not stop of course. The ones that may stay, and are still alive will be "filtered" and the ones striving for an independent Donbass will be "re-allocated".

This may well be Poroshenko's peaceplan in disguise. Because this of course will make Donbass extremely stable....

We remind that in the Dutch press (written, television, radio), as far as our knowledge reaches, no word has been said neither about the fosfor attack, nor the Lugansk-centre rocket attack, nor this unashamed "Filtration" programme. This filtration programme, if you do not want to call it ethnical cleansing, may well be described as "political cleansing". It is a remarkable way of "restoring order", and bringing "stability to the region" and "European democratic values". The only news that appeared today in Holland is that Poroshenko called Putin to express his grief about the appearance of alledgedly 3 Russian tanks in Ukraine. Alledgedly, because it is far from certain that these tanks came from Russia; they could be tanks captured from the Ukranians, as well as restored old tanks. Whatever the facts regarding the tanks may be, the fact is, that the news-supply in the Netherlands is completely onesided pro-Kiev-regime. 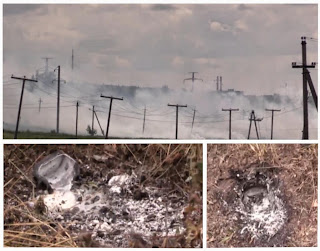 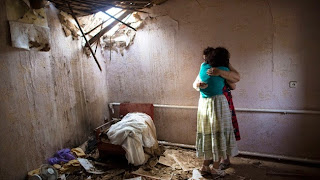 On the bus to Russia

Arrived in refugeecamp in the Rostov area, Russia.