Not much is known about Igor Strelkov, the man AP dubbed "the face of the insurgency in eastern Ukraine", and the fact that he keeps an ultra low profile certainly doesn't help his public image, if certainly boosting his shadowy, mystical status. However, yesterday in the aftermath of the swearing in of Ukraine's new president Poroshenko, Strelkov gave an extensive interview in which he laid out not only the "separatists" take on recent events in Ukraine but how they view the armed resistance strategically, and what, if any, the endgame is. In any event, the following interview will certainly not be available on any western media outlets so for those who believe in hearing both sides of the story to development an informed opinion, read on.

I believe that the situation will change for the worse, because now this so-called “legitimate” President immediately will turn to NATO countries, to Western countries, for help, asking, first and foremost, for military help. We can then expect to be confronted with new NATO tanks, helicopters, aircraft, advisors, instructors, mercenaries. There will be greater numbers of shells, troops and victims. This is all that I expect from this so-called “inauguration.” This morning [June 7, 2014] there was again artillery shelling of the Artem neighbourhood of Slavyansk. There our checkpoints are located along the perimeter, but the enemy regularly shells homes in civilian neighbourhoods. Specifically, the shells exploded here, here, near the Lenin Hospital, and here. The enemy can “boast” that they finished off two of their broken-down “BMD” APCs. Well, more accurately, not “BMD” APCs, just APCs. These we had long ago taken apart into spare parts. So they hit these remaining shells; they finished them off, so to say. With respect to infantry, we are facing a ratio of approximately 5-6 to 1. For one of my fighters there are 5-6 enemy soldiers. This is specifically with respect to the troops stationed directly near the city. Apart from that, there are also 50-60 pieces of heavy artillery, which is dedicated specifically to shelling the city. Also 1-2 Grad systems. A lot of tanks. These elements we cannot, unfortunately, engage directly, given the distance of 1.5-2 kilometres. All in all, the ratio of forces remains very much not in our favour. So, although the enemy has moved a portion of its forces from our theatre and transferred it, as far as I can tell, to protect the border, nevertheless, we are having a difficult time holding our ground. As a result, first and foremost, we need active help in the form of armoured vehicles, long-range AA elements, and artillery. This is so because the greater part of the enemy artillery force conducts attacks from positions that we are unable to reach. That is to say, they bombard us from long-range positions of absolute safety. All we can do is dig into the ground, build reinforced installations, but we are unable to counteract them in any way. Unfortunately, our mortars simply do not reach the positions of their heavy howitzers. No wonder, as we are facing such calibres as 240mm. The holes left by shells from these weapons in Semyonovka are easily identifiable.

It has become apparent, long ago, to anyone with even a superficial interest in military affairs that it is far easier to storm an intact city than a destroyed city. The Germans, in their time, got confirmation of this rule at Stalingrad. Yes, they are counting on being able to force the population out of here. And they claim that [once the population evacuates], they would be able to storm the city. In fact, this is simply a way to save face. A significant part of the population, at least in Semyonovka and Cherevkovka, has already left. Semyonovka has barely anyone left. Same with Cherevkovka. And yet, they do not attempt to storm them. There is one simple reason why: they understand full well that they will suffer significant casualties. Their infantry does not exhibit sufficient fortitude, whether on attack or in defence. In effect, they are simply exacting vengeance against us for precision strikes against their artillery positions, their checkpoints, against their armoured vehicles. They are taking out their anger by carpet-shelling civilian neighbourhoods. In theory, it is possible that they believe they are firing at our positions; however, in 90% of cases they hit areas where we have no fighters present.

They conducted strikes against Nikolaevskaia Power Plant specifically with the intent of taking it out of commission, so at to cut off electrical supplies not only to our city, but to a whole number of cities in the north of Donbass region. In fact, this was a direct attack intended to destroy the infrastructure that feeds urban and industrial regions. The same can be said about the continuing bombardment of industrial locations. In sum, we are witnessing purposeful destruction of the industrial complex. You can draw an analogy to an old joke about a Ukrainian who says “Even if I can’t eat it, at least I’ll bite it.” In other words, if I can’t have you, no one can. About right. I am predicting that not only the Slavyansk region, which, at this time, acts as a shield for the Lugansk and Donetsk oblasts/provinces, but also the entire territory of Lugansk and Donetsk regions will turn into a battlefield. It is obvious that no one will stop this military operation; no one is intending to terminate it. More than that, military elements are being used that are entirely excessive in fighting against small guerilla units. In fact, these elements are more-or-less useless. In a manner of saying, they are using cannons to shoot down birds. All of this will continue further, it will be transferred to Donetsk, to Gorlovka, to Makeevka, to Lugansk, to all the other cities and parts of the region. At least that’s how the Ukrainian army is acting. These are the conclusion that can be drawn from what the Ukrainian army is doing. This will turn into a humanitarian catastrophe not just at the scale of a city, but on the regional, possibly the world scale. I say this because there are over six (6) million inhabitants [in the region] that will become the targets of this very dumb, very unprofessional, very careless military machine. While guerillas (and we are, in fact, guerillas), i.e. militia, are able to defend cities, are able to repel infantry and even tank attacks by the enemy, we are, unfortunately, incapable of defending the region from airstrikes and artillery shelling. Equally, we are unable to destroy [artillery and aviation] because the ratio of the opposing forces remains disturbingly [not in our favour]. Regardless of how many volunteers we are able to field (and, first of all, we are unable to arm all of them, to this date we lack everything – rifles, ammo, anti-aircraft elements, and, most important, we lack anti-tank defence systems, including anti-tank artillery), and even if we receive all the necessary equipment and are able to match [Ukrainian] regular forces in combat, this would nevertheless lead to a complete humanitarian catastrophe in the region. Unfortunately, without peacekeeping forces (and I obviously mean Russian peacekeepers, as no other peacekeeping force would be accepted by us here, nor considered a “peacekeeping force”), the region will descend into bloody chaos, lawlessness. Everything that was built over decades would be lost, destroyed. 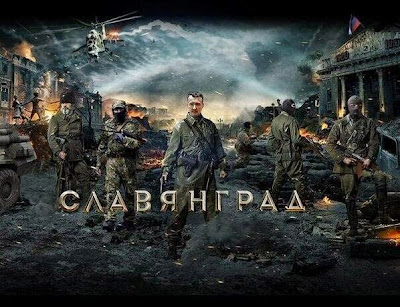 The Lugansk Republic also finds itself in a very difficult military situation, they must think of defending their own territory, their own cities and population. The one thing I can note is that we are coordinating our activities with the garrison in Lesichansk. This garrison made a request to be included in our command structure. Together with this garrison we are defending this part of the front.

Q: Poroshenko promised Putin that, in the nearest future, the war will be either brought to an end or suspended, in some manner. In your opinion, what did he mean when he said this?

A: I believe that what he meant is that the Ukrainian army will steamroll over the entire Donbass region, will eliminate all those who rose up against the illegitimate Kiev government, all those who rebelled against the discrimination directed against the Russian people, and that, in this manner, he would bring the war to an end. I think this is what he had in mind. An oligarch who sponsored the so-called “Maidan,” who made the most warlike claims and adopted extreme positions while still a Presidential candidate, who is a puppet controlled directly by the United States of America, this oligarch cannot change who he is in one day or one night. Of course, what he means is that he plans to “impose order” with an iron fist, the fist of his punitive forces. Put it bluntly, we saw how they “impose order” from the example of what happened in Krasniy Liman. That is why we will, of course, resist to the last man. We will resist successfully, I am emphasizing this again. The real problem is not that we will be unable to defend ourselves or to withstand attacks by the Ukrainian forces, the problem is that if this war continues indefinitely, the region will fall to a humanitarian catastrophe. As a result Russia will become the recipient of millions of disenfranchised, impoverished and angry refugees. Everything that was built, created over decades, if not centuries, will be destroyed. We continue to prevail over them again and again, on all fronts. Nowhere have they been able to achieve a victory of any real significance. They were able to overwhelm our garrison of one hundred in Krasniy Liman by throwing a force of three thousand (3,000) and coming against them from all sides. Even so … And where they have to square off against a more-or-less trained, numerous, at least somehow provisioned force, they always, regularly suffer defeat. They cannot advance even a step. Their tactic consists of filling the landscape with troops, tanks, APCs, and artillery, and defending themselves, in hopes that, without numerical and equipment parity, we would be unable to push them from their positions. In effect, their positions at Mount Karachun are an example of this approach. We are unable to kick them out of Karachun first and foremost because their force is at least three times the size of my garrison [in Slavyansk]. We are blessed with excellent morale and fighting spirit, our fighters are highly motivated, while they have a great deal of old, but still effective “metal” [Note: i.e. armoured vehicles] that fights against our militia.

Ukrainian mass media lies, lies without end. They lie so unapologetically that Goebbels would have envied their style. He is probably turning in his grave now. And, so, they are interested in ensuring that no one else is able to provide this information. And, because Western media, to a large degree, plays along with its Ukrainian colleagues, and provides only such information that benefits Ukraine, the Russian media becomes their natural enemy. As a result, they consider the Russian media their direct enemy in the field of informational warfare. With respect to international law and norms, they never cared for them one bit. For example, here they use cluster bombs and similar [illegal] weapons. They shoot, and, as you correctly pointed out, remove entire township from the face of the Earth. They shell cities. They will continue in this manner with ever-increasing [brutality]. This is because they experience no material opposition [to what they do]. They have no other tactic. They are unable to take up their weapons and go on attack, go storm our positions face-to-face with us, despite their profound numerical advantage in troops. As soon as their infantry faces direct combat, it retreats. They retreat even if supported by tanks. They abandon their tanks and retreat. They understand that their infantry is not combat-worthy. Their only option is to shell us from afar, again and again and again, and hope to inflict the greatest possible destruction. Read more at http://www.liveleak.com/view?i=2a1_1402275539#d7L8szzWWkLUFlAo.99
Gepost door Blik op 15:53