The ghost of a lieutenant: our name is Strelkov 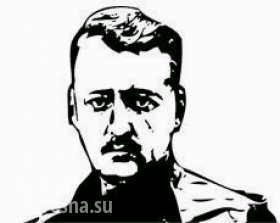 by Alexander A. Dugin

Translated from Russian by Gleb Bazov

Igor Strelkov (Girkin). I feel that his pseudonym is his real name. A Russian man holds the defence of a country (Novorossiya), with 20,000 men, against a frontal attack by an entire army. Yet, an army, without a general, is no army at all. [And, conversely] where there is a general, an army will rise [to his command]. Without a leader, any army will fall apart in mere hours. Strelkov is fighting against the country of Ukraine, where power was seized by NeoNazi putschists. One man against an entire country.

In Kiev, orders are issued by the Junta and, to some extent, they are implemented by the Ukrainian armed forces (fortunately for us, rather reluctantly). Yes, the armed forces of Ukraine do not want to fight. Yes, they do not understand what [they are being asked to fight for] and against whom. But behind them stand the executioners from “Praviy Sector”/National Guard. They are afraid to confront Strelkov, they are far more used to killing civilians (what can they do – they are Bandera’s grandchildren), but they are always ready to shoot their own units in the back. And yet, notwithstanding all [these limitations], they are still an army. And [Ukraine], however middling and subsisting along the trajectory of its inertia, is still a state. The inertia of institutions is a serious matter – all the states of the former USSR are still burning through the Soviet institutional legacy. In Ukraine’s case, they are burning through it quite literally.

And then there is Strelkov. On whose behalf and in whose name is he fighting? He has been holding the defence of Slavyansk and of the entire DPR [Donetsk People’s Republic] for so long. Who gives him orders? Who stands behind him?

What is most paradoxical is that no one [controls him]. No one stands [behind him]. No one gives [him] orders. There is no one else. His superiors are of a different kind. He considers himself conscripted, mobilized by a substance the existence of which is almost universally doubted. Strelkov was called to arms by the Russian Mir[, the Russian World], the Russian People, the Russian civilization.

Power in Kiev was seized by rigidly Russophobic forces. And everyone froze, quieted down, fled. The well-fed heels of Yanukovich flashed [in the night]. Jiggling his belly, he started to gorge on Pshonka. Confused, the light of a projector flickered over Lavrov’s eyeglasses. Akhmetov started a series of negotiations with Kolomoiskiy to divide [the country] into shares. Euromaidan chavs spit out the husks. And that is when Igor Strelkov appeared. Calm, nonchalant, a little not of this world. From another time, from another history, from another society. Like two drops of water alike with a pre-Bolshevik lieutenant of a Tsarist army. And, as it turns out, he used to transform into such a lieutenant in volunteer reenactments. And, then, finally, he turned into one.

And took Crimea. It was later that [the rest] arrived: technocrats, Crimean women in sailors’ shirts, photographed using pre-distributed tablets over the background of “polite men,” and the elegant prosecutor Poklonskaya. But it was Strelkov who started it, and it was Strelkov who finished it.

When Putin said that there were no forces of the Russian Federation in Crimea, he did not sway from truth. Strelkov is not of the Russian Federation army. He is a shadow of Russian past, a ghost of Russian future. He is that which we lack in the present. Strelkov came out of the Encyclopedia of love for your Fatherland, 1910 edition. He came off the First World War poster and immediately entered into battle.

“Crimea has been taken,” Strelkov said calmly into the void (conditionally, to Kremlin). We are advancing into Novorossiya. But no one reads his telegrams. They hang in the air, until the Russian people, whose life centres are strangled by the chokehold of Russophobic elites, the 6th column that seized power in the 90s and has no intention of giving it up, stumbles upon them. One of these simple Russian people, colonel Putin, also stumbled upon Strelkov’s reports, sent from another time and another space. And he also breathed [them in]. But here is the strange part – this Russian man of proletarian background, just as confused and inarticulate as our entire people these days, only vaguely remembering that which he used to be and which he is destined to become – this man turned out to be the President. Putin picked up these unaddressed telegrams that arrived from nowhere. Written simply until they were needed, until Russians needed them. And read them. This is what is meant by “Crimea is ours!” A headline sent into the void accidentally reached an addressee.

The 6th column is petrified, no one understand how this could have happened. But it is already a fact. Putin read the telegrams. And their contents reminded him of something. “Who is this Strelkov?” – asked Putin, but immediately forgot what he was asking, not waiting for an answer.

In the meantime, and just as he promised to no one in particular, i.e. to the Russian Mir [World], Igor Strelkov went further. Turning his face to the North, he must have thought like this: go to the left, and you’ll burn alive. Go to the right, and you will come home. And Strelkov went forward, to the North. Pointing at the map, at random, he landed on the city of Slavyansk. “What a good name!” – he thought. How close it is to my volunteer heart. There are Slavs here, as well as glory. This is my city. And then he advanced forward.

In Slavyansk there was a female mayor and many beautiful Russian people. The woman mayor soon disappeared somewhere, but the people stayed. Strelkov called upon the dejected men and asked them where weapons were kept. They searched and found some. And that’s how the creation of the Donetsk People’s Republic began.

At first, no one believed Strelkov. Especially Kiev. Putin will not intervene militarily; Washington and Brussel will bind him by his arms and legs, the 6th column will befuddle his mind, and he will be finally confused by the morons, by PR gurus and by traitors, in whose midst he feels familiar and comfortable. And that’s why we will put Slavyansk to the knife, and, in the process, will demonstrate the puissance of our banderite prowess, decided the power in Kiev, and, rubbing his hands in anticipation, the recently strangled Boris Berezovsky, reincarnated in the guise of Igor Kolomoiskiy, supported them in their undertaking. This is what Kolomoiskiy was thinking: “First, I’ll call my [allies] in Russia, they will quickly abandon the South-East.” He called them, and he was heard. They started to give up [the South-East]. Slavyansk came under attack. Shells started whistling, helicopters started circling, houses caught on fire. Everyone took everything into account. Except one thing: Igor Strelkov does not belong to this reality, the reality of Washingtons and Brussels, of Kolomiskiys and Friedmans, of Poroshenkos and Akhmetovs, of Tymoshenkos and Surkovs, of Maidans and the Presidential human rights Representatives.

He is from another world, from the Russian Mir [World], where such rot simply does not exist. A different geometry [commands] his transparent patriotic volunteer consciousness. Did he take Crimea? Yes, he did. Did he go to Slavyansk? Yes, he went. Did he arrive there? Yes, he did. Did he organize the men? Yes. Give them weapons? Yes. And now he rose up and stands. From all the sides there are orders, orders that sound like volleys – and volleys that sound like orders. Strelkov, get lost! But he stands. They send him telegrams: “Go, pull back! We are retreating! It’s an order! We took Crimea, and that’s enough.” But he just stands there; he does not hear them. To the front are the firing guns of a bestialized Ukrainian army. What’s this? What is happening? Putin is not sending the troops, and, yet, we can’t take not only the South-East, but even the insignificant city of Slavyansk. And why is this happening? Not clear. How is Strelkov still holding on? Why is it that we are suffering such high losses? Why is it that, every day, we have fewer and fewer APCs, guns, gangs of thugs, richly covered in swastikas, and our losses already count into the hundreds? What is happening? Didn’t Kolomoiskiy make the call? Are they having time zone issues in Washington? Is the leadership in Brussels stuck at a gay club and late for work? When will Strelkov be recalled? When will they kill him? When will he disappear, finally reassuming his place on a yellowing pre-Revolutionary poster?

Did you notice that Strelkov’s appeals are completely devoid of hysteria? It is as if he is sleeping. The level of hysteria is at zero. Sometimes he says things that formally are to his detriment. But he is neither a technocrat, nor a politician. He is the ghost of a true Russia, a double, who came from the true Russian present into our false unRussian “present.”

In Slavyansk, Igor Strelkov habitually holds defence. Your Excellency! We are defending Novorossiya! Yes, sir! Yes, don’t give an inch! Who is he talking to? To whom is he giving the military salute? We do not see, do not hear, we cannot even guess. He lives in his own strelkovite world, and this world is [the true] Russia. And what world do we live in, in this case? Or, maybe, it’s all a dream?

Perhaps so. But the dreams that I will be seeing, these dreams will be about Igor Ivanovich Strelkov. They are dearer to me than any reality. It is because they are the reality, and his DPR is real. And his friend – the people’s governor, Pavel Gubarev – is real. And his Novorossiya is reality. And his Russia is reality, and it is also my Russia, strelkovite Russia, the only and the deadly Russia. And her name is Slavyansk.

Strelkov's latest reports (must read's if you are not indifferent to the situation in Slavyansk and Kramatorsk): 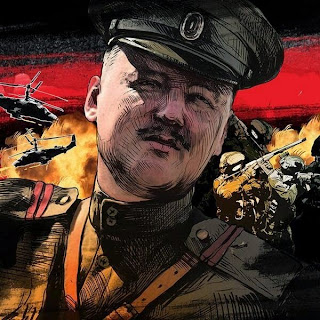