Dutch Professor: "The United States are addicted to enemies"

"The United States are addicted to enemies"

Monday 9 March, the Dutch emiritus Professor Karel van Wolferen held an open lecture at the occupied University of Amsterdam. He addressed the subjects of the crisis in Ukraine, the financial crisis in Greece, the inertion of Europe and the destructive power of NATO. "Get rid of NATO!". And of course the US: "The United States are addicted to enemies."

Some of the highlights of his presentation are following:

* The current Ukraine movement has nothing to do with the original Democracy movement.

* The movement was partly hijacked by Nazi's.

* "Very consistent effort by a number of groups in the US to destabilise parts of the former USSR.

* These NGO's and Thinktanks @work in Eastern Europe and Russiaaimed to undermine and break-up the good (trade-)relations between Europe (Germany) and Russia.

On the terrible state journalism finds itself in:

* Dutch newspaper NRC-Handelsblad isn't even a shadow of its former self. It is terrible what has happened to NRC Handelsblad and alike media like magazines, newspapers and tv-programmes that used to have some integrity: It is gone! There is no journalistic integrity. This is pretty awfull.

* For journalists it is essential to be curious and find out the answers to questions not yet answered.

About what a concerned citizen can do:

* The United States are addicted to enemies

* NATO is an extension of the American military industrial complex.

* In order to diffuse conspiracy theories, she (Sheila Kamerman, employee of NRC Handelsblad) is making them more ridiculous, like with extra-terrestial reptiles. She is mocking you as a journalist, making you feel guilty for being curious. And it helps! In the US it is totally effective. You cannot ask questions.

* I ask questions. Why the police inspector who was in charge of the 2 guys shot dead in the Charly Hebdo case, writing his report, shoots himself in the back of his head? With his wrong hand?

* Without NATO there would not be a Ukraine crisis.

* If we will have Hillary as the next President we will have war with Iran. With the republican candidates it is awfull too. 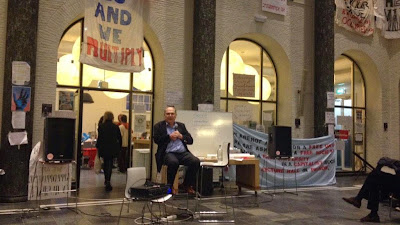