Dutch Parliament was to discuss MH17 aftermath and more sanctions against Russia. We headed for the Hague and shot some footage. Came back and wondered what to do with it; ok, you can see it below, decided to share it with you anyway. If only as proof of having been there on the day the new sanctions against Russia were decided on and the MH17 crash aftermath was further discussed.

Lovely American lady comse to The Hague and shares her thoughts: "US gets too involved in things and it's not our business" While asked about Ukraine, Pam from Florida shares her thoughts over her USA getting too involved in things... on the day Dutch Parliament discusses MH17 crash and EU/USA getting more "involved" in more sanctions against Russia... Maybe Europe should get a little involved in USA affairs and start campaining "Pam for President"...

Minister Timmermans and his crew preparing for getting into the Parliament room Dutch Minister of Foreign affairs preparing to jointly start entering the combat zone Parliament room for discussions on the MH17 case and of course sanctions to Russia. Ask a carpenter a solution to any problem and the answer will always be "a hammer". Ask EU and USA politicians for a solution to any problem: "sanctions to Russia".

Frans Timmermans on sanctions and the crash-site The Hague Tuesday 29 July, Parliament meeting with Frans Timmermans, Dutch Minister Foreign affairs. Film does not last too long for being kicked out of the room. "Only professional Journalists may film here". Police coming to help the clerk, also got help again from side neighbour visitor who urged unprofessional cameraman to obey the professional police officer and front neighbour looking very nasty at. The resistance in me broke and I had to push the "off" button. Although I still tried "cann't find the button" which was partly true. Welcome in the The Hague, city of Law and Order Peace and Justice!

Aftermath of a visit to the Timmermans MH17 Sanction the Russians show Police officer teaching citizen of the Netherlands how European democracy works: Filming is only for professional journalists, not for the unofficial ones. "And you are an unofficial one who has not paid the fee, so no-show! You don't give a shit about the rules here!" Cameraman humbly answering "sorry, was a little bit naught, wont do it again".

So was there still any news at that The Hague Parliament meeting? Two things.

1. Unconfirmed as I can hardly believe I heard it correctly. If anyone can either confirm or deny it, please do, but I thought I heart Timmermans stumbling that Ukraine authotities promised cease fire in 40 kilometer around the crash site and he had the impression, not completely sure, they complied with that. He started again with a digest about people who should have been here with us in The Hague in shorts and in holliday/summermood but because of events beyond their responsibility they are not. He took that modus not only once. Some people might find this impressive. Others may find it pathetic.

2. Timmermans, also more than once, reiterated that Russia coorporates fully regarding solving MH17 affairs. Something that could not be said about Ukrainian authorities. One member of parliament (did not get the name) askes repeatedle a couple of times if sanctions on Russia then could not harm this good Russian coorporation. Timmermans about 3 times asked the member what he should do then??? I wanted to scream out that maybe no sanctions, but I seem to have been the only one in the room having those thoughts. Timmermans explains that the sanctions against Russia are because of "Russia's behaviour" in general over the last few months and its interference in Ukrainian affairs. Nothing to do with MH17. "If these sanctions will be done, it will be a very strong signal "you are on the wrong track".

"An independence with more poverty"

Timmermans also replied to Lavrov who said that sanctions would make Russia more independent. "It will be an independence with more poverty for the people". At that moment he left unmentionned that it will also mean more poverty in Holland and the world.

I also believe to have heard, but I leave it as unconfirmed, "Holland gets a lot of support from the whole world. Ukraine wants a relation with Russia based on punishing it for intruding in East Ukraine". I also wrote down this quote: "195 of "our" people have been abducted from their possibilities. Against their will they have fallen victim of a conflict caused among others by Moscow". (Again he meant the conduct in general, not specifically). Then I believe to have heard some kind of treaty being prepared making it possible military can be sent to Ukraine with full immunity for the foreign (Dutch) soldiers. But (for the moment) no armed military is being sent.

With the critics to Ukrainian authorities (yes really, there were some critics on their difficult coorporation) he mentionned that "Ukraine being the bad guy is not the case", "It is very complex". 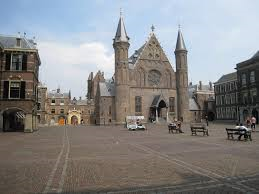