Holland is the only country where the EU association of Ukraine is subject to a referendum to be held in April 2016. All indicators show the Dutch are going to say "NO". Poroshenko is trying to turn the tide. In this light, his visit to the Netherlands should be viewed.

It remains to be seen whether his visit did more good than bad. Taking the reactions to his speech at the University in Leiden, things look gloomy to the President of the heavily divided country.

Poroshenko's speech in Leiden was part of his two-day visit to the Netherlands. Poroshenko also met with representatives of the Parliament and he visited King Willem Alexander.

The reactions to Poroshenko's speech, that could be watched via a live-stream at the web-site of Geenstijl, promotors of the referendum as well, were mostly negative and above-all ironic.

Frans Bierings: "According to Poroshenko we are cowards: "Eurosceptics are Euro-cowards". And this element must join the EU? Get out of here!"

Eindbaas: "Listening to this man talking about free media, owning five tv-stations himself is the utmost of dirty hypocrisie."

Cuyahoga: "A pitty no questions could be asked; I wanted to know his explantion of him glorifying the Nazi's. He is a fan of UPA, who slaughteres tens of thousands of Poles in one of the most horrific etnic cleansics in Ukraine's history. Boy oh boy, what a drama. Anybody able to read and write and still voting in favour of this association (with Ukraine) really lost his mind."

Tyromancer in irony modus: "Was the word "money" mentionned already? Or did he stick to Ukraine values, "democracy, transparency and trust"?

Double Punch: "Will the good man believe it all himself?"

Copy Cat: "The questions have been agreed upon beforehand. Democracy at a premium"

Lupuslupus: "Why there are no homo's protesting in Leiden? They did upon Putin's visit as well, did not they? Ohh, wait, in Ukraine homo's are welcome and for 100% accepted of course. That's the reason of the complete absence of gay-protesters."

In short, the Dutch were far from impressed by the chocolate-sweet Double-Dutch of the President doing so much his best to be charming. 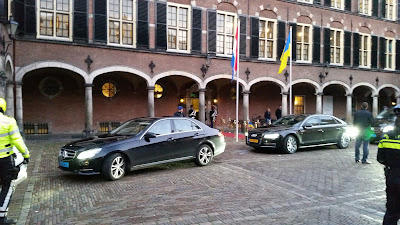 Yesterday Poroshenko visited the Dutch Parliament. Here he is driving away. No activists were present. Also the gay-protesters, so much present when Putin arrived some years ago, did not take the effort to come to meet with Poroshenko. Anyway, the few people being present were kept at a large distance. No contact being possible. The same counts for the speech in Leiden. Three people were allowed to ask well prepared questions to Poroshenko. Spontanity at a record low. From the man preaching with words democracy and transparency.
Gepost door Blik op 17:54