Tomorrow it is 2 May and it is the first anniversary of the Odessa tragedy. A broad daylight slaughtering of 48 people. Person by person. Executed by Extreme Ukraine nationalists and criminals, covered by the western backed Kiev regime. Some of the faces and bodies of the victims coverred with petrol and burnt black. At BBC it is lying a GoGo (common business for this organisation):

Here the corrections and truth. With thanks to Ben.

"Deaths came as pro-Russian protesters clashed with Ukrainian government supporters in the city." - Reality: Deaths came as Right Sector Militants were bussed in from Kiev and West Ukraine to suppress Anti-fascists in Odessa.

"Protesters were pictured throwing petrol bombs at the building"

- Here we go with the "Protester" business. Whenever it's Right Sector, they're protesters, and whenever they're pro-Russians, they are terrorists.

"The fire broke out in Odessa's Trade Unions House, the regional office of Ukraine's interior ministry said. It did not give details of how the blaze started."

- Well that's convenient! It didn't give details of how the blaze started! Probably because Corporate media doesn't want to inform it's public that it's the Neo-Nazis who started the fire.

"The exact sequence of events is still unclear, but reports suggest the separatists had barricaded themselves inside the building and both sides were throwing petrol bombs."

- Oh really? So while Anti-fascists were stuck in the burning building, they decided to light up Molotov cocktails instead of try to survive. Makes perfect sense!

"Ukrainian Deputy Foreign Minister Danylo Lubkivsky told the BBC he regretted the loss of life but insisted Russia was behind the violence. 'The situation remains under control. But the security situation is threatened by Russian special agents' he said."

- Lubkivsky has no credibility period. And how exactly is Russia behind the violence? What good would it do? Let's play the game of let's blame them for what we're doing.

It's clear the BBC is trying to paint the Right Sector as victims of the fire as well, or wait "pro-government supporters". And they also want to give the impression that Anti-Fascists were asking for it since they too were apparently throwing petrol bombs.

The rest of the article is of course garbage as usual, reinforcing their garbage. What more could you expect from the BBC?

Odessa, a day before the conmemoration

A day before the anniversary of the Odessa tragedy, occupying forces of the Ukraine army are present around the Trade Un ion building to opress any protest. See video, HERE. 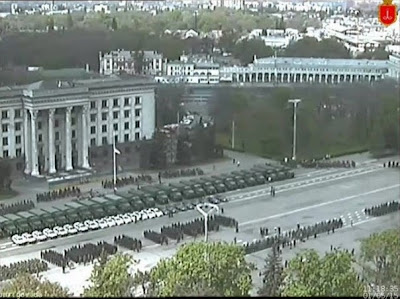