Livelong Prisonhood in Holland for : "To make him call"

A bigger scandal is hard to imagine. Even the most freaky filmmaker could not think of such a playwrite. But in the Royal Kingdom of the Netherlands it is happening at this very moment. While you read! 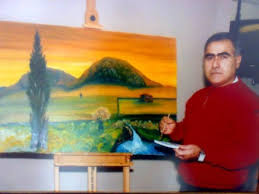 Baybasin, picked up painting while already 20 years innocent in a Dutch jail in the Royal Kingdom of the Netherlands

The Kurd Baybasin disclosed information about the Turkish government being involved in heroin trade. He was arrested in Holland, alledgedly for ordering a murder in a tea-garden in Istanbul. However, the problem is, the so-called murderers have not even been convicted for this murder, but set free. More-over, as the heart of the "proof" against Baybasin is used a remark he made over the Phone: "Make him call". However, the Dutch managed to convert this in "To make him cold", which in Dutch is a way of saying, "to kill someone", however in English or in Kurdish this is not a common way of speaking. Moreover, in the process, clearly tampered and falsified telephone taps have been used. The lawyer of Baybasin, Adele van de Plas, states she does not need to watch the tv-series "Making a murderer", because she is living it in real, together with her client Baybasin, every day. In real.

To make things even more dirty: alledgedly Joris Demmink, high former official at the Dutch Justice Ministery arranged this scam by orders from Turkey, alledgedly being blackmailed with illigimate contacts with minors. Possibly Prime Minister Marc Rutte is aware and collaborating, not to solve this case, but covering things up!

Footage, with thanks to Micha Kat, who made us aware of below video, and thanks to Jan Roos who did the interview.

Further reading, also at well-informed Boublog and JDTV ("Every next day Baybassin stays in jail, is a disgrace for Holland").
Gepost door Blik op 11:47