In view of Victory Day (Den Pobedi) 2019, Dutch Bio-Farmer, Hugo Jansen, has placed a Giant Bill Board along the Motorway in Northern Brabant, the Netherlands.

Hugo Jansen has placed similar billboards, thanking Russia, before, and has drawn quite some attention to the immense role Russia has played in liberating from Nazi's. 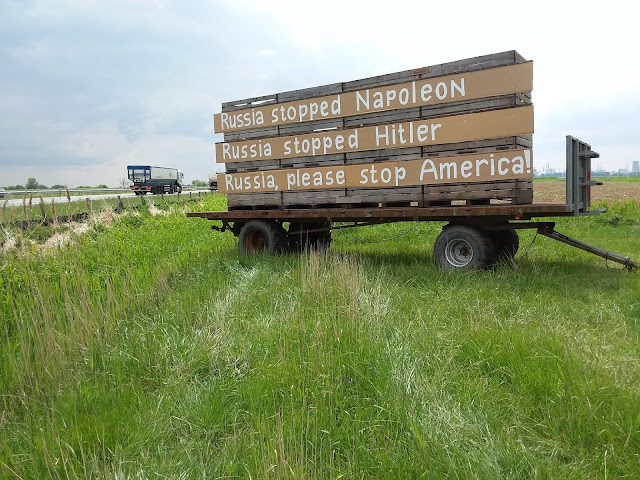 Dutch Farmer Hugo Jansen placed the billboard alongside the A4 Motorway, in the southern tip of the Netherlands somewhere between Bergen op Zoom and Antwerpen. Not to be missed by anyone.

"Only Ten Words"
Hugo Jansen on his latest Billboard:
"They are only 10 words. But it stands for a complete geo-political reality. Napoleon, Hitler, and at this moment of time, sadly, we now have the USA going into that same section. You can speculate now if the situation in Syria has been regulated thanks to Russia, if the war in Venezuela has been prevented because of Russia, and if the war can be stopped in Iran as well, with the aid of Russia. They are all possibilities and thoughts, comprised by these 10 words."

Growing Dutch People Acknowledgement for Russian Role
In the Netherlands there is a growing sentiment and movement within its inhabitants to acknowledge the Russian pivotal role in, and to thank the Russian people for, the liberation from Nazi's and other horrors. The Russian people as no other, have undergone and withstood the horrors of war and Nazi's. Another example of this acknowledgement is the initiative of Marie Therèse ter Haar to organise 9 May: 'Freedom and peace for Europe and Russia’. The event starts at 16:00 hours at Gelredrome Stadium, Arnhem. There is still room for a few more people, so come and join thursday 9 May 2019 in Arnehm.