It has all the aspects of a intended assault on the eye of a popular and beloved leader of the gilets jaunes. Jerome Rodriguez is being extracted from the zone of conflict.

Dutch state media are silent. They do not know how to report on this. They cannot continue lying and making themselves even more un-reliable. But reporting what happens in France the cannot do either as it does not fit in their discours to protect NWO-puppet Macron. 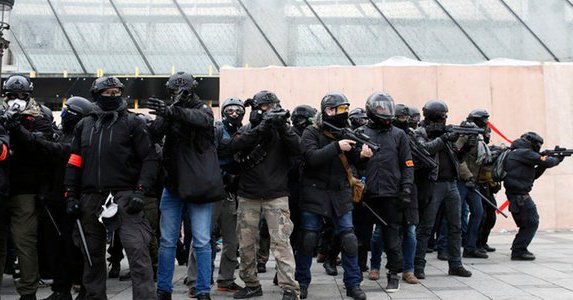 Macron regime thug, not even dressed in uniforms but in jeans and black jackets, ready to shoot with their swiss made devastating guns, at the eyeballs of peacefull protesters. EU-horror a gogo. Dutch state media like NOS of Marcel Gelauff conspicuously refuse to report the facts from France and prefer to feed the Dutch audience with fake and distracting other "news". Look at this footage of one weekend ago, how Macron regime troops abuse force against a peacefull woman. Hit her. Drag her through the street. Appalling.

By the way, also Telegraaf, AD, all fully orchestrated, fail to report on today's Yellow Vests events. Not a single word. They are now going down in an accellerated pace.